Understanding Socialism (2019)
Understanding Marxism (2018)
Capitalism's Crisis Deepens: Essays on the Global Economic Meltdown (2016)
Democracy at Work: A Cure for Capitalism (2012)
Occupy the Economy: Challenging Capitalism (2012)
Contending Economic Theories: Neoclassical, Keynesian, and Marxian (2012)
Capitalism Hits the Fan: The Global Economic Meltdown and What to Do About It (2009)
New Departures in Marxian Theory (2006)
Economics: Marxian versus Neoclassical (1987)
Rethinking Marxism (1985)
Economics of Colonialism: Britain and Kenya, 1870-1930 (1974)

Imagine: Living in a Socialist USA (2014)
A Marxian Analysis of the Economic Crisis and Greece (Greek language, 2014)
Class Struggle on the Homefront (2009)
State Capitalism, Contentious Politics and Large-Scale Social Change (1998) 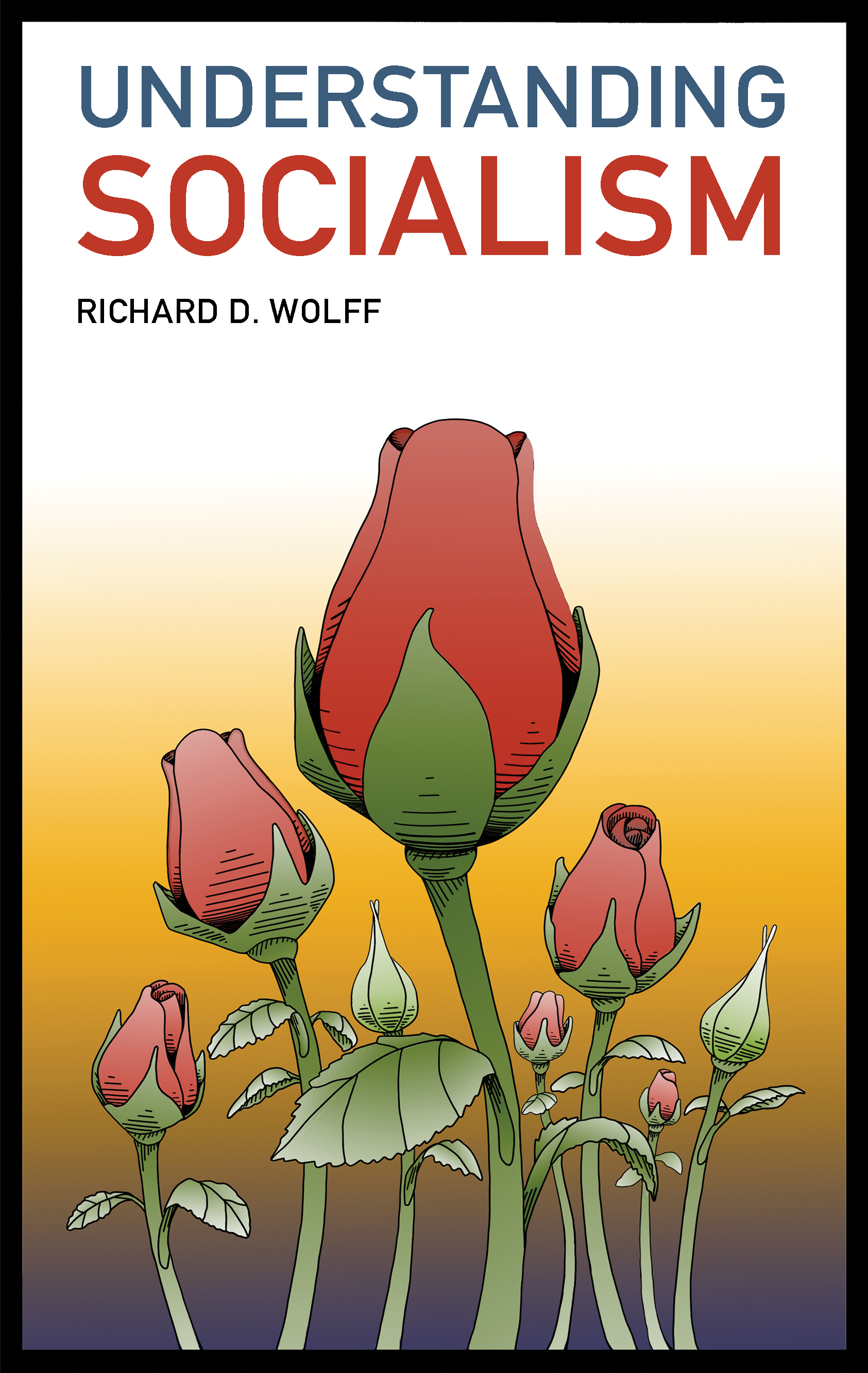 Understanding Socialism tackles the taboos and unveils the often hidden histories of socialism, but most importantly it offers a way forward: a socialism built on democracy in the workplace. A blend of history, analysis and opinion, Understanding Socialism is an honest and approachable text that knocks down false narratives, confronts failures, and offers a path to a new socialism based on workplace democracy.

Understanding Socialism not only explains what socialism is and has meant to various proponents, it also looks at the past transition from feudalism to capitalism as a model to help us visualize the next transition out of capitalism. Understanding Socialism explores how socialist theory was used and applied to shape the histories of countries like Russia and China principally, and many other countries in smaller but important ways. It analyzes the successes and defeats of those countries, the world's reactions to them (anti-socialism and fascism), and how all of those factors offer important lessons for the building of a 21st century socialism.

Why should we pay attention to the great social critics like Marx? American, especially now, confront serious questions and evidences that our capitalist system is in trouble. It clearly serves the 1% far, far better than what it is doing to the vast mass of the people. Marx was a social critic for whom capitalism was not the end of human history. It was just the latest phase and badly needed the transition to something better. We offer this essay now because of the power and usefulness today of Marx’s criticism of the capitalist economic system.

The crisis that erupted in 2007 continues to inflict immense and uneven costs on modern society. "Recovery" becomes yet another luxury that bypasses the vast majorities in capitalist nations. The articles and essays gathered in Capitalism’s Crisis Deepens: Essays on the Global Economic Meltdown written between 2010-2014 explore the specifics of the deepening crisis as they became clear, caught the public’s attention, or defined a particular historic moment. As the table of contents below illustrates, the organization of the essays, at once topical but also chronological, seeks to enable readers to grasp the crisis as a moving, evolving stage in capitalism’s history. This book makes a great companion to any introductory or advanced course covering economics or the study of contemporary capitalism.

Democracy at Work: A Cure for Capitalism (2012) 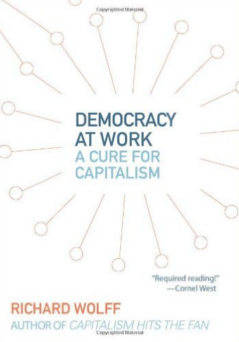 A new historical vista is opening before us in this time of change, Wolff writes in this compelling new manifesto for a democratic alternative based on workers directing their own workplaces.

Richard Wolff is the leading socialist economist in the country. This book is required reading for anyone concerned about a fundamental transformation of the ailing capitalist economy!" - Cornel West

Ideas of economic democracy are very much in the air, as they should be, with increasing urgency in the midst of today's serious crises. Richard Wolff's constructive and innovative ideas suggest new and promising foundations for much more authentic democracy and sustainable and equitable development, ideas that can be implemented directly and carried forward. A very valuable contribution in troubled times." - Noam Chomsky

Bold, thoughtful, transformative-a powerful and challenging vision of that takes us beyond both corporate capitalism and state socialism. Richard Wolff at his best!" - Gar Alperovitz, author of America Beyond Capitalism 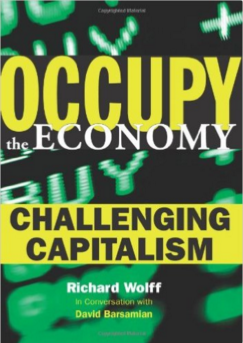 Today's economic crisis is capitalism's worst since the Great Depression. Millions have lost their jobs, homes and healthcare while those who work watch their pensions, benefits and job security decline. As more and more are impacted by the crisis, the system continues to make the very wealthy even richer. In eye-opening interviews with prominent economist Richard Wolff, David Barsamian probes the root causes of the current economic crisis, its unjust social consequences and what can and should be done to turn things around.
While others blame corrupt bankers and unregulated speculators or the government or even the poor who borrowed, the authors show that the causes of the crisis run much deeper. They reach back to the 1970s when the capitalist system itself shifted, ending the century-old pattern of rising wages for U.S. workers and thereby enabling the top 1% to become ultra-rich at the expense of the 99%. Since then, economic injustice has become chronic and further corrupted politics. The Occupy movement, by articulating deep indignation with the whole system, mobilizes huge numbers who seek basic change. Occupying the Economy not only clarifies and analyzes the crisis in U.S. capitalism today, it also points toward solutions that can shape a far better future for all.
Purchase 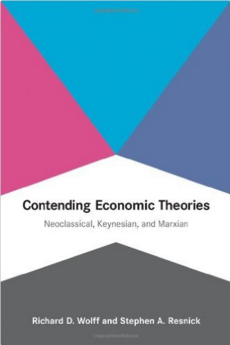 With Stephen A. Resnick, Professor of Economics Emeritus at the UMass Amherst
Contending Economic Theories offers a unique comparative treatment of the three main theories in eco- nomics as it is taught today: neoclassical, Keynesian, and Marxian. Each is developed and discussed in its own chapter, yet also differentiated from and compared to the other two theories. The authors identify each theory’s starting point, its goals and foci, and its internal logic.
The authors, building on their earlier book Economics: Marxian versus Neoclassical, offer an expanded treatment of Keynesian economics and a comprehensive introduction to Marxian economics, including its class analysis of society. Beyond providing a systematic explanation of the logic and structure of standard neoclassical theory, they analyze re- cent extensions and developments of that theory around such topics as market imperfections, information economics, new theories of equilibrium, and behavioral economics, considering whether these advances represent new paradigms or merely adjustments to the standard theory. They also explain why economic reasoning has varied among these three approaches throughout the twentieth century, and why this variation continues today—as neoclassical views give way to new Keynesian approaches in the wake of the economic collapse of 2008.
Purchase

Capitalism Hits the Fan: The Global Economic Meltdown and What to Do About It (2009) 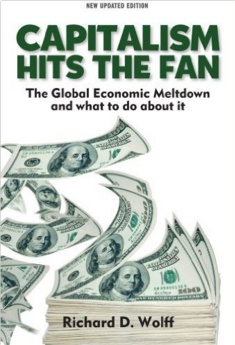 Capitalism Hits the Fan chronicles one economist’s growing alarm and insights as he watched, from 2005 onwards, the economic crisis build, burst, and then dominate world events. The argument here differs sharply from most other explanations offered by politicians, media commentators, and other academics. Step by step, Professor Wolff shows that deep economic structures—the relationship of wages to profits, of workers to boards of directors, and of debts to income—account for the crisis. The great change in the US economy since the 1970s, as employers stopped the historic rise in US workers’ real wages, set in motion the events that eventually broke the world economy.

The crisis resulted from the post-1970s profit explosion, the debt-driven finance-industry expansion, and the sequential stock market and real estate booms and busts. Bailout interventions by the Federal Reserve and the US Treasury have thrown too little money too late at a problem that requires more than money to solve.

We must now ask basic questions about capitalism as a system that has now convulsed the world economy into two great depressions in 75 years (and countless lesser crises, recession, and cycles in between). The book’s essays engage the long-overdue public discussion about basic structural changes and systemic alternatives needed not only to fix today’s broken economy but to prevent future crises.

With unerring coherence and unequaled breadth of knowledge, Rick Wolff offers a rich and much needed corrective to the views of mainstream economists and pundits. It would be difficult to come away from this… with anything but an acute appreciation of what is needed to get us out of this mess.” - Stanley Aronowitz, Distinguished Professor of Sociology and Urban Education, City University of New York 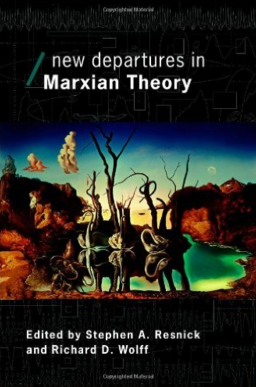 This book brings together key contributions and underscores different interpretations of Marxian theory generally and of Marxian economics in particular. In facing and trying to resolve contradictions and lapses within Marxism, the authors have confronted the basic incompatibilities among the dominant modern versions of Marxian theory, and the fact that Marxism seemed cut off from the criticisms of determinist modes of thought offered by post-structuralism and post-modernism and even by some of Marxism’s greatest theorists. 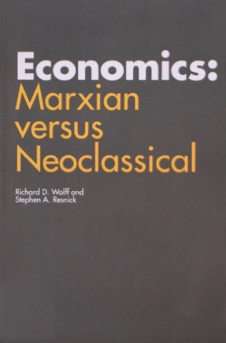 Wolff and Resnick provide a unique, balanced explication of the differing assumptions, logical structures, and arguments of neoclassical and Marxian economics. They address broader aspects of evaluating or choosing between alternative theories, but their conclusions are nonpolemical. Throughout, math is used simply and sparingly.
Purchase 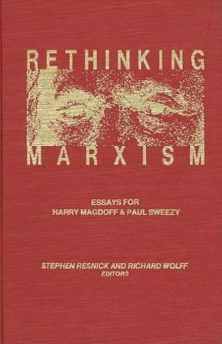 This festschrift volume honors the works of Harry Magdoff and Paul Sweezy. An introductory essay by the editors examines the evolution of their contributions to Marxian theory and analysis. A bibliography provides the most complete listing of their work to the point of publication. Internationally renowned Marxist scholars (including Ernest Mandel, Charles Bettelheim, Immanuel Wallerstein and many others) contributed original essays in fitting tribute to the importance of the honorees' works.
Purchase 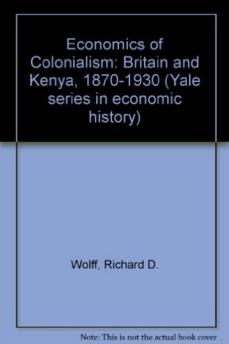 From the Yale Series in Economic History. 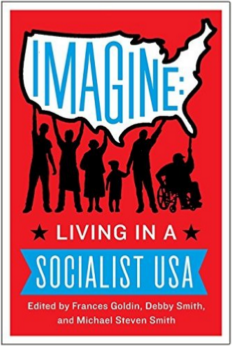 Imagine: Living In a Socialist U.S.A., edited by Francis Goldin, Debby Smith, and Michael Steven Smith, is at once an indictment of American capitalism as the root cause of our spreading dystopia and a cri de coeur for what life could be like in the United States if we had economic as well as a real political democracy. This anthology features essays by revolutionary thinkers, activists, and artists—including Academy Award-winning filmmaker Michael Moore, civil rights activist Angela Davis, incarcerated journalist Mumia Abu Jamal, and economist Rick Wolff— addressing various aspects of a new society and, crucially, how to get from where we are now to where we want to be, living in a society that is truly fair and just.

A Marxian Analysis of the Economic Crisis and Greece (Greek language, 2014)

Class Struggle on the Homefront (2009) 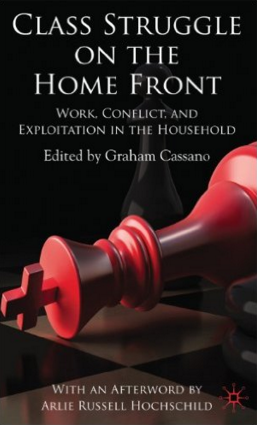 Home Front examines the gendered exploitation of labor in the household from a postmodern Marxian perspective. The authors of this volume use the anti-foundationalist Marxian economic theories first formulated by Stephen Resnick and Richard Wolff to explore power, domination, and exploitation in the modern household. 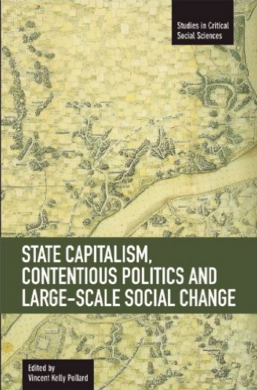 State capitalism is back. It never went away. This book looks at the role of state capitalism in major European and Asian societies. It confronts neo-liberal pieties about the role of markets and private property in capitalist development and radical accounts which see the state as the antithesis of capitalism. State capitalism is a normal form of capitalist development. Its extremes may vary but it has been, and remains, central to an understanding of modern capitalism. This is especially the case in the so called Communist and Communist worlds of Russia and China, and for alternative economies like that of India and the Philippines, which are the focus of this timely and challenging book.