The Gravel Institute: How Capitalism Exploits You

At the very heart of capitalism is a system of exploitation. That is not a pejorative label: it’s an objective definition of what work actually means. In order for capitalists to make a profit, their workers have to earn less than the value they produce, and that extra value has to go to their bosses. You’re being robbed – and it’s the system called capitalism that’s doing it. Professor Richard Wolff, the Founder of Democracy at Work, explains.

"At any job you work at, the condition of your employment is that you produce more by your labor than you get paid. So in the capitalist system, no one is paid what they’re worth. Capitalism means they get paid significantly less. All profit is value extraction. And that means that all profit is theft -- from you."

Watch this video on The Gravel Institute. 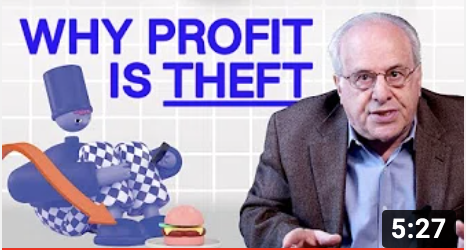