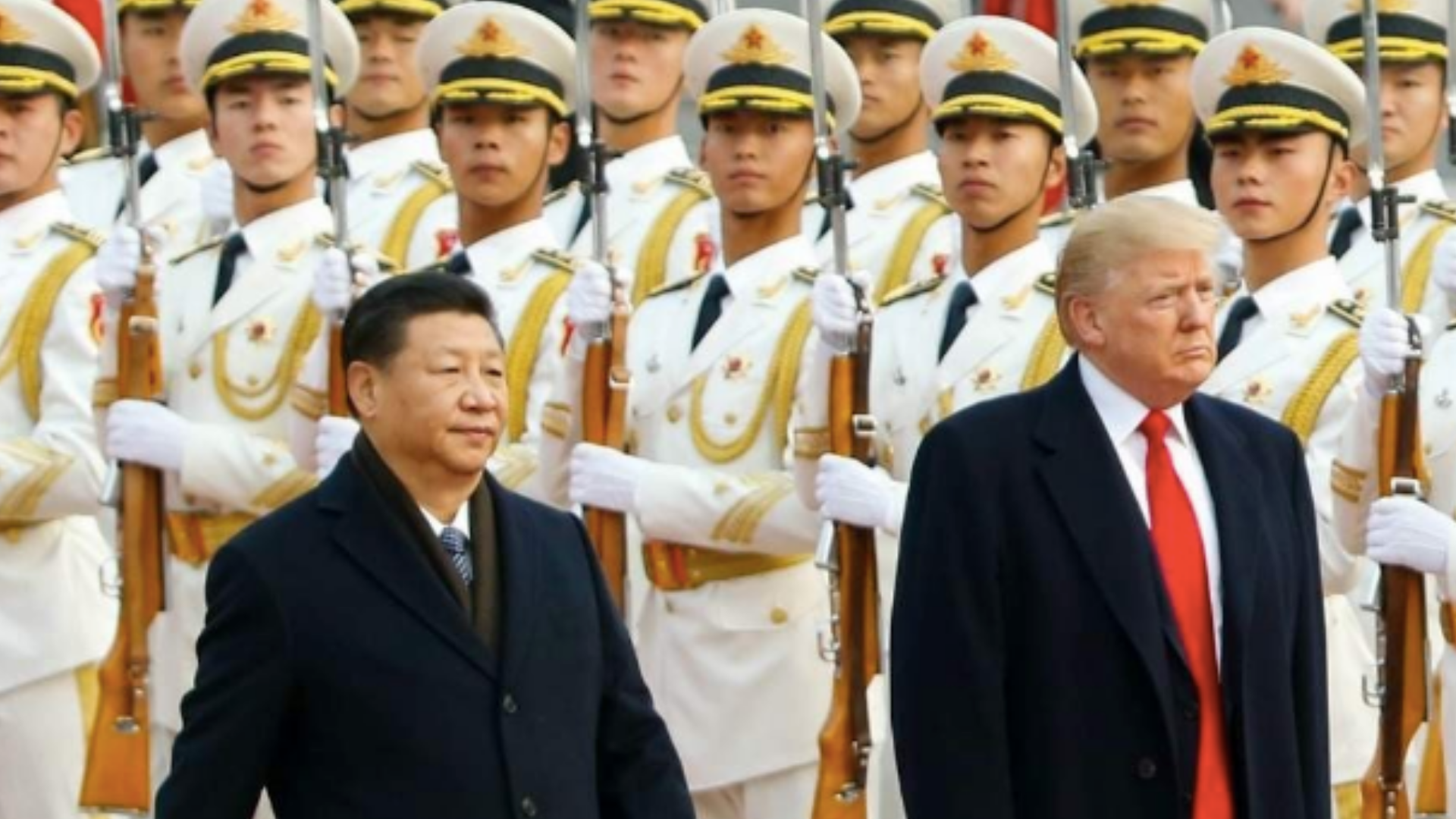 The second reason for Trump’s tariff war on China is that it serves a useful political purpose for Trump/GOP posturing. (Photo: Thomas Peter-Pool/Getty Images)

The claim that the Chinese are stealing our intellectual property – chiefly production technologies - is largely bogus. Yet many are duped. All economic development across the millennia has included the dissemination of new technologies from those who have them to those who want them. The dissemination works via buying and selling products, copying production processes and products, sharing production facilities, exchanging access to resources and markets for access to technology, and yes, no doubt, some downright stealing too. Disseminators include workers and bosses, merchants and manufacturers, students and professors, journalists and politicians, and just plain travelers.
Often, when those who want another’s technology get it, they develop it further, whereupon the developed technology in turn gets disseminated elsewhere (likely including back to where it originally came from). Greece disseminated technology to Rome, Rome to middle Europe, Europe to America, and yes America to Asia among countless other disseminations, past and present. Recently, the Rolls-Royce luxury car company’s CEO attacked Aston-Martin and other companies for stealing their concepts. A few decades ago, the cry went up in the US about Japanese stealing our technology. More decades back, the US stole technology from Great Britain accordingto the British.
Demagogues, especially the nationalist variety, try to make political capital out of recycling stories of awful “foreigners stealing” our technologies. It allows them profitably to pretend that they can “protect the nation and its economy.” Dissemination happens, one way or the other, and never more easily than now with the global internet, world trade, and jet travel. The fakery of proclaiming against it has never been more glaring.
It has always been a presumption of most economics that dissemination of intellectual property (more or less open flows of new products and technologies) is good for economic development everywhere. The copyrights, patents, and trademarks that block dissemination all have limits: they expire after a time, they only block copies not variations, and so on. Those limits are a recognition that the spreading of knowledge – intellectual property – should be enabled and encouraged.

Capitalist enterprises routinely buy, study, and copy parts of other companies’ products, especially those of their successful competitors. Economic theories stress that often such replication of successful competitors’ products and technologies is how enterprises survive. It is a regular part of capitalist competition and serves a social purpose of lowering average costs of production and thus prices to consumers.

Within today’s world economy, capitalist enterprises in less developed economies confront a choice. They can use an inferior technology to produce commodities to sell in their own markets as “infant industries” protected from global competition. Their commodities will be inferior to and/or more expensive than their excluded competitors’. That is one possible development path. An alternative path offers to share the local market and local resources (especially cheap labor) with foreign competitors in exchange for sharing (gaining access to) the latter’s superior technology. If that offer to share is mutually profitable, a deal may be struck. For demagogues later to refer to such arrangements as “stealing” is, to be extremely polite, a misrepresentation.
US universities have for years faced a crisis of dwindling numbers of US students applying for graduate work. The cause was and is shrinking job opportunities for new PhDs (as US colleges and universities shifted to hiring cheap adjuncts instead). Many universities sought and welcomed paying Chinese students whose arrival kept graduate programs afloat. During the years that such students spent in US universities, their teachers, fellow students, studies, and travels provided all sorts of access to “intellectual property” in the US.  Neither Mr Trump nor anyone else can know what bits of knowledge were in any meaningful sense “stolen” as opposed to learned, shared, read in professional journals, acquired through lab experiments, etc.
The narrow, legal usage of ‘Intellectual property theft” - such as violating copyright, patent, or similar protections of idea, concepts, products, etc. - is a problem at least as old as capitalism itself. Such violations exist everywhere, inside and outside the US, and are prosecuted in courts around the world all the time. We do not know whether China experiences such violations, on a per capita basis, more than other countries or more vis-à-vis US intellectual property than that of other countries. Thus the application of even the narrow legal meaning of intellectual property theft term to China’s behavior is not warranted.
Suppose finally that Trump’s tariff war succeeds in somehow blocking China from acquiring US intellectual property. That will provide incentives for China to (1) make more deals with non-US companies, (2) further and more quickly develop its own intellectual property and block the US from it, and (3) deny US firms access to the Chinese market and to Chinese laborers because China’s access to US firms’ technology is blocked. Such steps all carry costs and risks for US companies and the US economy now and in the future. Moreover, it is highly likely that the US’s blocking efforts will fail to reach their objective. Too many avenues for transmission of intellectual property will still be active, officially and unofficially, formally and informally, legally and illegally.

We are left with the question: why then pursue a strategy of trade wars to block intellectual property theft if it is mostly fake news? The answer has two parts. First, the accusation of intellectual property theft (often paired with “forced technology transfer”) amounts to a demand for better terms of access for US firms who want to produce and/or sell in China. If they must share their technology, for example, they want bigger shares of profitable joint ventures, etc. The Trump tariff war aims to coerce better terms from China for US companies active there. Trump expects and gets approval from US companies so long as they believe they may gain more from concessions forced on China than they lose from tariff-caused disruptions of their currently profitable global supply chains

The second reason for Trump’s tariff war on China is that it serves a useful political purpose for Trump/GOP posturing. The simple logical story runs as follows: America’s “greatness” was undone by bad deals made by establishment politicians in the past. These allowed the Chinese (and others) to take advantage of the US by means of intellectual property theft. Trump is putting an end to that theft by his headline-dominating tariff wars. Thereby America will become great again. And perhaps China, after 20 years of spectacular economic growth, will be “contained,” in the arrogant jargon right-wing pundits like to indulge.
This logic is neatly packaged and promoted politically. Integrated with big budget outlays for the military, big tax cuts for corporations and the rich, and big proclamations of patriotic chauvinism, the integrated package may suffice to win elections in 2018 and 2020. But the fakery of intellectual property theft accusations will be exposed, as it has in the past, and likely soon. The accumulating chickens of multiple false accusations will then come home to roost. A personally enriched Trump can then retire to Mar a Lago.
CommonDreams
Do you like this post?
Tweet