Can Socialist States Compromise with Elites?

This article originally appeared at Alborada.net and was written by Slava Zilber

Economist Richard Wolff examines Latin America to discuss whether stable socialist states that are accepted by the political and economic elite are feasible and how to achieve such a compromise. 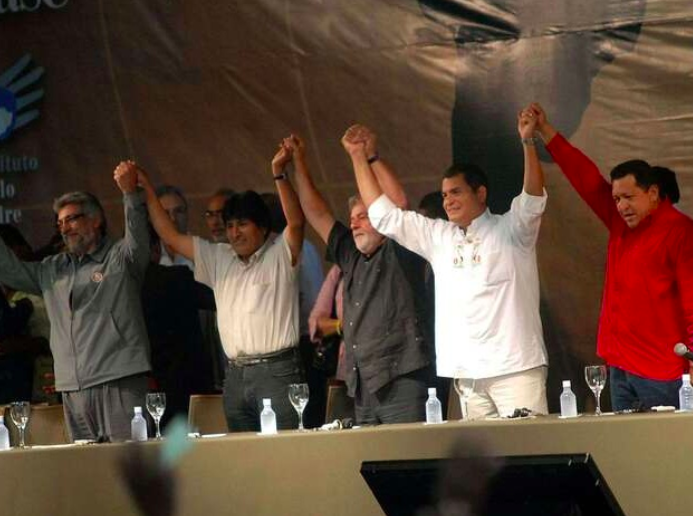 In terms of Latin America, we have absolutely no experience with allowing a socialist government to build a socialist society with or without the elite. And the reason is the implacable opposition of the United States to any socialist government that arises. You can go back half a century ago to Guatemala with the [Jacobo] Árbenz regime overthrown in 1954. You can go to the 1970s with the overthrow of Salvador Allende in Chile. Then, you can go to Chávez and Maduro in Venezuela and you can go to Evo Morales in Bolivia. And you can go to Cheddi Jagan of Guyana. I can give you one example after another. You probably know them. Wherever a socialist economy and government have been established, the United States has tried every way to destroy it: with economic sanctions, with military interventions, with covert CIA activities and so forth.

So I can’t answer the question, ‘can a socialist government work a compromise with the elite that governed the society before?,’ because every elite in Latin America knows that the minute they are voted out by a socialist – say, like Castro in a revolutionary way or in other countries like Chile with the ballot – they can immediately turn to the US government and get every kind of legal and illegal support to undo the socialist victory, whether it’s by voting or it’s by counterrevolution. And every elite in Latin America has done that, without exception.

The only way the Cubans were able to survive was basically because the elite there tried to get the Americans to help them. In 1961, the United States armed and equipped a military effort to overthrow Castro. That was defeated. And in the years afterwards, the elite left Cuba, moved to Florida, which is only 90 miles away, and that probably saved the Cuban Revolution because the elite wasn’t there anymore and couldn’t do what it has done, for example, in Venezuela or in Bolivia or in Chile.

Having said that, let me take a step back. I’d have no doubt that, if a socialist society or government was not threatened in its existence from the minute it took power, it would be possible to reach compromises with the old elite. And the reason I say that is because capitalism, when it overthrew feudalism, did that. Let me give you an example from Russia: in 1853 or whenever it was that feudalism ended, one of the things the new capitalist government in Russia did was to offer the feudal lords government bonds. ‘We will buy your land. We will turn it into capitalism. But we will give you long-term bonds that ensure that you will be a rich person for the rest of your life.’ The feudal lords of Russia accepted this deal was the best they could do. And they didn’t want to suffer the fate of the feudal lords in France who in 1789 faced a revolution and they ended up with nothing.

Even in China today, a communist government with a socialist policy is making all kinds of accommodations with private capitalists. The socialists and the communists are confident that they can keep China going in the socialist direction. I don’t know if they can. But the more they feel they can, the more compromises they are making with private capitalists in China and with foreign capitalists – British, American, Japanese – that are establishing factories and offices inside China under the power of the Communist Party.

So I think that accommodations can be made. It is mostly a question of whether the capitalists feel that their best policy is accommodation or whether they feel they are still strong enough to overthrow every socialist government that comes to power anywhere in the world.

Richard Wolff was in conversation with Slava Zilber.